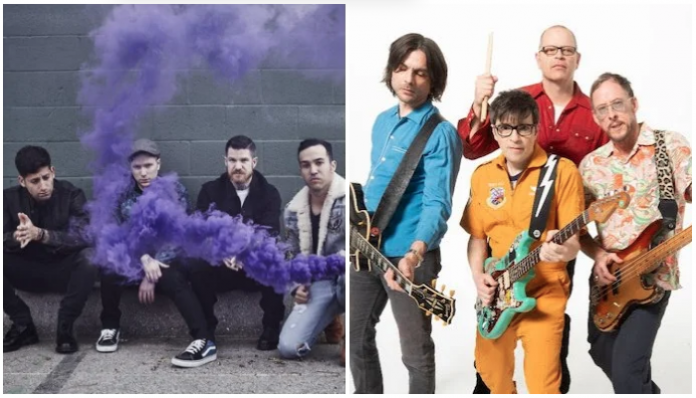 Fall Out Boy and Weezer will appear on tonight’s episode of Celebrity Family Feud hosted by Steve Harvey.

Fall Out Boy will be joined by actor and comedian Seth Green, while Weezer will team up with Suzy Shinn for the game show.

Read more: These are 19 of the best music videos to come out of the scene

In a tweet, Fall Out Boy shared that they will be playing for the FOB Fund, an organization that raises money for gardening, food education, among other resources in Chicago.

Fans can catch their favorite rock acts battle it out at 7 p.m. EST on their local ABC channel or head over to ABC.com to stream it tomorrow for free. The show can also be streamed on Hulu.

The show will air one hour ahead of its regular time due to The Emmy Awards airing at 8 p.m. EST on ABC.

More On Fall Out Boy

With the 2020 general elections just a few months away, fans are reminding the internet that Fall Out Boy might not even exist if it wasn’t for Joe Biden.

A viral tweet about Biden and Fall Out Boy’s connection has caused a previous Pete Wentz interview to resurface which discusses Wentz’s direct connection to Biden.

In November 2008, Barack Obama and Biden were running for their first presidential term. During this time, Wentz revealed the unexpected connection he has to Biden.

In an interview with the Associated Press, Wentz shared that his parents met while working for Biden. If neither of them worked on the campaign, Wentz surely wouldn’t exist.

“I would not be standing here actually in reality at all because my parents met working for Biden,” Wentz said. “They met on the campaign, so they have this particular affection for Joe. He came to their wedding. If it weren’t for Joe Biden, I would not exist as a human being.”

As the general elections near, Biden and Kamala Harris are continuing their campaign to take over the presidency from Donald Trump and Mike Pence. To better help their efforts, Fall Out Boy fans are reminding the internet that one of their favorite emo bands wouldn’t exist without the help of Biden.

Read more: Yes, Taco Bell is getting rid of even more menu items in 2020

“If Biden wins the presidency that means we will have a United States president directly responsible for the existence of the band fall out boy.”

A photo of young Wentz with Biden was also tweeted.